A Spring welcome to England. The flowering cherry is scattering pink confetti blossom

with the slightest breeze and the azalea is wearing a ballgown of the deepest pink. The sunlight is dazzling, almost Australian bright, in a cloudless blue sky.  We visited Redditch where Stephen and I spent our teens. Dad was a forester but the new job turned out to be mostly desk-based and planting along the streets of newly built housing estates. Park House, our home for those formative years, has disappeared. We had a huge garden, .8 of an acre, and there was a public car park at the road frontage, plenty of room for development. It was demolished six years after we left and a new housing estate built. It was a strange experience to adjust our eyes to the present when the past was still so clearing our minds. The centre of town was similarly unrecognisable but we found our way to the high school before we left. Lunch was at The Bell, around the corner from Stephen’s house in Harborne. It is a black and white timbered building about 450 years old, with a narrow passage through the middle and two tiny rooms either side. Even people of our modest height have to duck through the doorways. The pub is situated next to the twelfth century Norman church, as was the custom. Stephen and Judith were married there.

The next day we were back at the airport, to fly to the Isle of Man. It is an hour’s flight, at a low altitude so the window seats offer a view of farmland, sea and the island’s coastline. Our hire car is a Nissan micra. a sensible size for the narrow roads here. We drove to Dalby where our holiday cottage is, dropped off bags and drove to Peel to see Mum. She was in the corridor talking to another lady and I think for a moment she was taken by surprise. Her memory has worsened since last year. 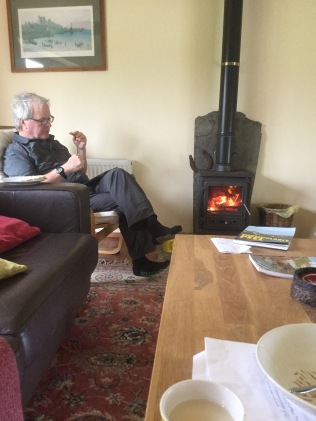 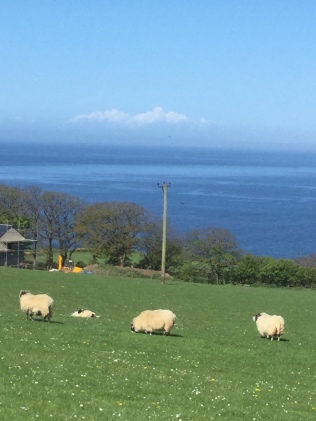