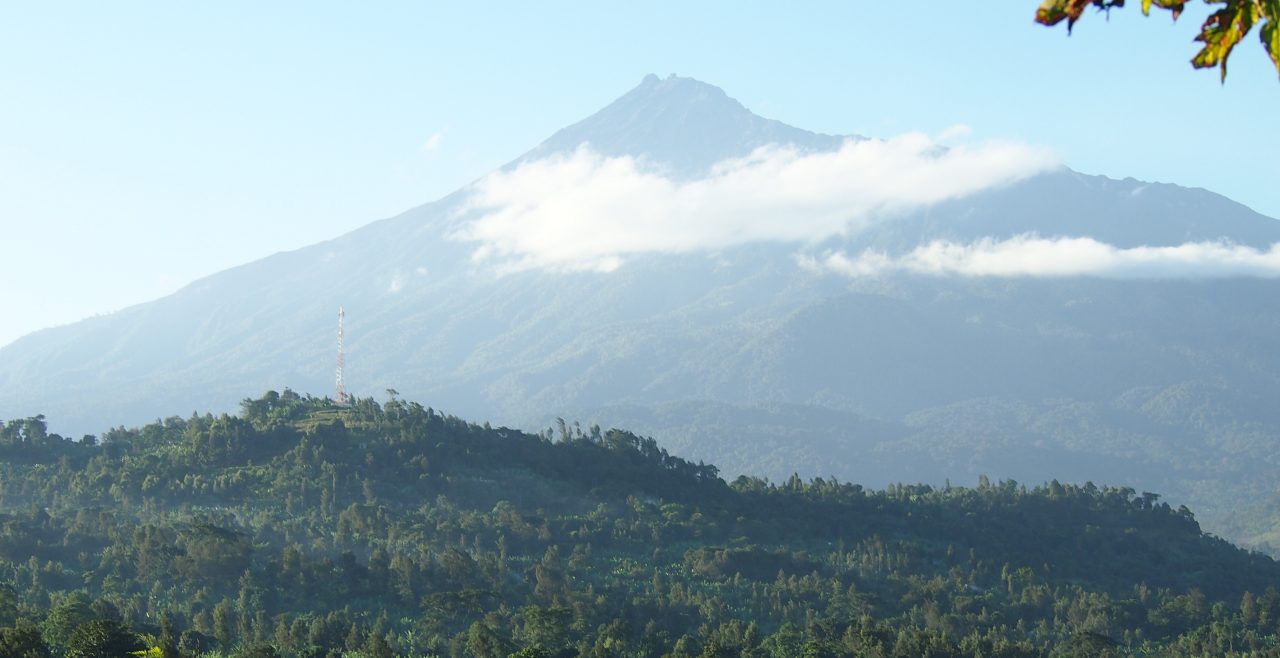 Around the campfire last night, we discovered Jen and Hilary had booked a private jeep safari for the morning. They were happy for us to join them and share the cost. It meant another early start but we were getting used to that. Gerard had the earliest start because he had booked a balloon trip, starting at 4.30 am. He had a sleepless night worried that he wouldn’t wake up in time. We saw his balloon later. 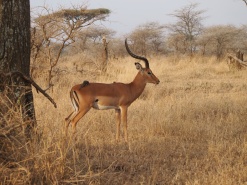 Our first sighting was of an impala in the golden morning sun. The black twisted horns rise in a curve from the brow and its coat is the same tan and cream as the red earth and dry grass. We saw lots of impala and never tired of their graceful beauty. A vivid patch of green announced a waterhole. The grass and vegetation contrasted sharply with the surrounding area. A pair of pretty, brown geese lived there, and along the stream were tall storks, looking like old lawyers in black gowns stooping over the water, looking for a meal. The stream meandered on and beside it strolled a lioness, quite purposefully. She saw a gazelle, which prepared to run, but the lioness decided not to chase and they both returned to their own business. 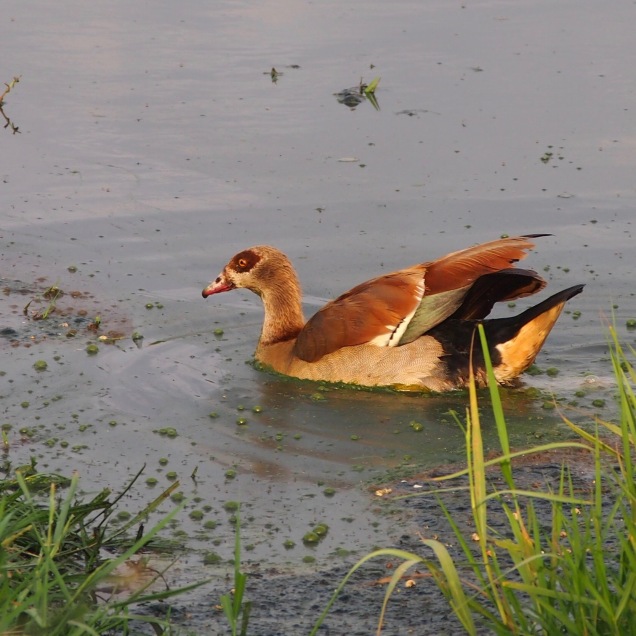 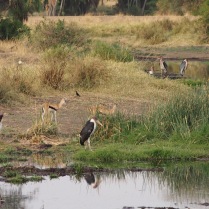 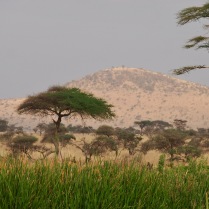 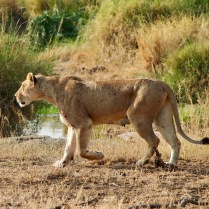 The jeep stopped whenever we wanted to watch an encounter. There was no sense of urgency, no set route. Drivers radioed each other about sightings and there were many connecting tracks to see the ‘Big Five’ animals especially. Next was a male lion, sitting regally in the shade of a bush. While we watched, he rolled over and fell asleep. Baboons crossed the road in front of the jeep, mothers with infants clinging to their backs, males stalking arrogantly, in charge of the troupe. 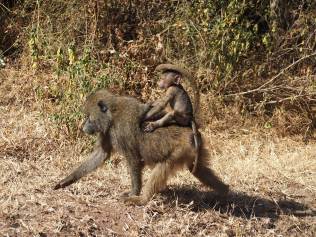 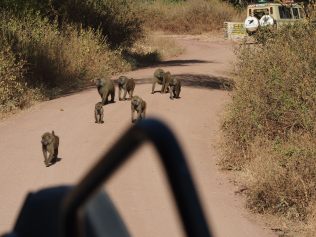 To our left was a group of ostriches, two males and three females. They were flapping their enormous wings at each other in a mating ritual. On our return journey, hours later, a couple were walking together and the others had gone. 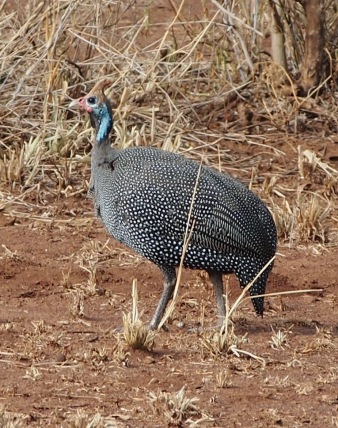 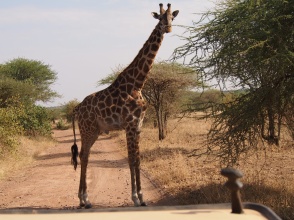 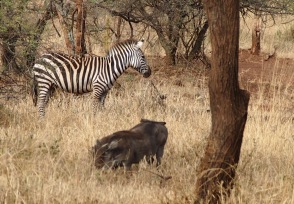 Quite often we saw zebra and warthogs grazing together, or zebra and giraffes. A flock of guinea fowl fluttered nervously at our approach but did not screech. They are used to raise the alarm on farms.

A young giraffe was grazing by the track and the jeep slowed to a stop. He stared at us, perhaps we had interrupted a meal, ambled to the centre of the track and turned to stare once more, posing for photos, before stretching out to nibble the tasty tree on the other side. It is impossible to not take photos. 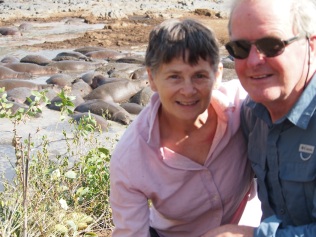 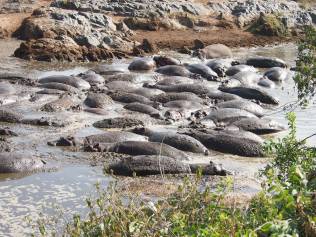 The highlight of our day was the Hippo pool. As we pulled into the car park, we couldn’t see any hippos but this was one place we could disembark. Other people were looking over a fence and bushes. As we joined them, I gasped. There must have been a hundred hippos wallowing in the scummy, muddy water. They were tightly packed, barely moving but for their little stumpy tails twitching, splashing mud over each other. Then a large bull clambered onto a small female and proceeded to mate with her. I was quite fascinated. How on earth did he cling on? His bulk nearly drowned her, she shoved her nose up for air briefly. Another male decided to try his luck. He was soon chased off, the bull raised his head and thumped down into the water, sending a muddy tidal wave over nearby bodies. Oblivious to this drama, several crocodiles lay on a sandy bank soaking up the sun. 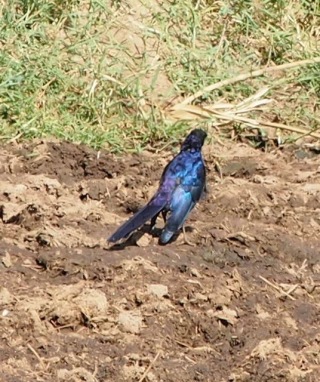 The bird life in Tanzania can be strikingly colourful in contrast with the camouflage of animals. One about the size of a small crow, was iridescent peacock blue, another looked like a satiny, emerald green ibis.

On our way back, under a large acacia were two mother elephants and their calves. Perfect. I felt as if I had eaten a banquet.

There was a fuss when we arrived back at camp. Where had we been? We were late. It looked as though our driver was in trouble so I made sure his boss and our leader knew that it was not his fault. Apparently, another driver had misinformed Justaz that our jeep was stuck for an hour and he was worried. And so, to lunch.

The afternoon was relaxing and washing clothes. Some went out for another game drive but we had such a great experience already we stayed back.