It was a lovely morning for the last ride of the trip, cool, sunny and not too many hills. Adriana and I were in the bus and Pat rode 20 of 40 km before joining us. We all stopped at a café on the outskirts of a town/village for picnic lunch and ordered coffee, or tea, as I got the last teaspoon of coffee in the jar. I bought copper bracelets from a street vendor. From there we were all in the bus for the three hour drive to our hotel in Arusha. Before the crew disappeared, we had a big thank you to say and gathered on the balcony where we had all met. I was given the job of thanking them and had to refer to my diary to include all that we had seen and done. It felt like much more than 12 days. We had taken up a collection which was presented in a picnic lunch bag, decorated brilliantly by Rashma with memorable pictures, hippos, leopard, Juma’s cooking pot, the bus and Justaz on a bike. He kept the bag.

We had thought of going into town but rested instead, showered and got reacquainted with the rest of our baggage. There was a big night ahead. Cocktails at 6pm followed by dinner at the restaurant across from the bar. We squeezed into two taxis. It was an odd experience eating western food. And not washing up or flapping the plates dry. 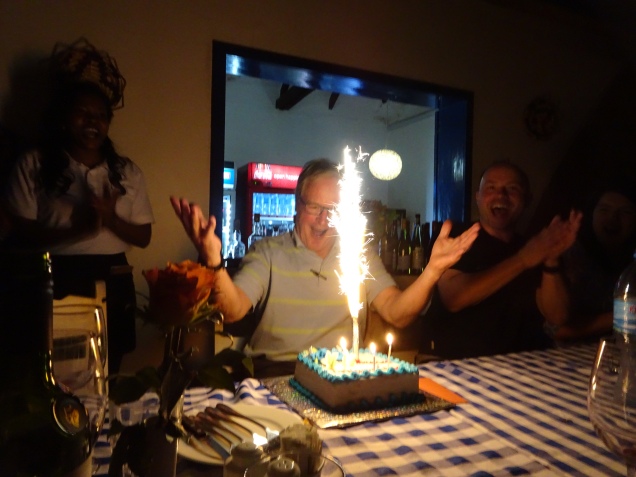 Towards the end of the evening, an announcement was made by the maître d’h. A special occasion. The entire staff came out and sang Hakuna Matata to Pat for his birthday. It was organised by Justaz, I had no idea and had to quickly grab the camera as a birthday cake appeared with not just sparklers, but a firework on top shooting silver stars to the ceiling. It was a perfect surprise. Goodbyes were hasty as we realised that Pat and I were leaving early, before breakfast, the next day. What a fabulous end to the trip of a lifetime.